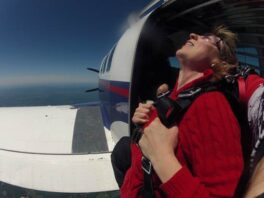 Skydiving was never on my bucket list. My reaction to my friends proudly handing me a gift certificate surprised them—I asked them what possessed them to pick a gift like that. Were they tired of me? To which they argued it seemed like a great idea, since last year I rode a rollercoaster for the first time and even did aerobatics in a military jet. Somehow I am starting to get a reputation. It didn’t click in my head that shooting machine guns, defensive driving, tree climbing, hostage rescue training, racing Jaguars, and doing barrel rolls in a plane made me seem like a daredevil, an obvious candidate for one half of a plane ride.

Backing out wasn’t an option, because I didn’t want to feel forever like a chicken. I have nothing to prove to anyone, but proving something to myself is a lifelong saga. I just had to come to terms with having to do it. My husband was egging me on. He said it would put a new pep in my step. He is afraid of heights, and felt compelled to check on my life insurance policy, but he bravely booked my trip I was trying to postpone till mid-summer for the first nice-weather weekend. Love that man. 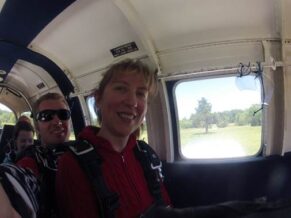 By the time drove on a sunny morning with my dear friends and family to the DC Skydiving Center, I had peacefully accepted my fate and began to gingerly look forward to the experience. We even brought our kids, 7 and 8, to witness my feat. This would undoubtedly get me the Mother of the Year Award if I went splat in front of them. But I have already earned a few of those, juggling motherhood with running a growing business development company.

Having signed a waiver giving away all my rights, even in case of instructor’s negligence, I had to watch a lovely video on the dangers of skydiving. Despite the macabre content, I reached a calm and curiously excited state, as if my sense of self-preservation went on vacation. I think I even disappointed my tandem instructor, a beefy Russian guy named Dennis, when I coolly answered him that I wasn’t scared at all.

A dozen of us got packed like sardines on each other’s laps in a rickety Cessna reeking of fuel, close to a huge opening on a plane’s side, covered by a flimsy-looking plastic curtain. The plane fired up the engines, and the pilot started blasting music that usually accompanies videos of skiers jumping off a helicopter down a mountain side. The kind that’s meant to dull your senses, make you crave danger, and feel that you are oh-so-extreme. It certainly took an edge off of the shaking airplane merrily climbing to 10,000 feet. 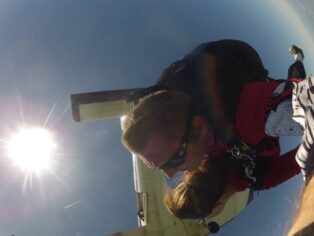 The pilot mischievously dove the plane nose down for a dramatic zero gravity effect, and then leaned the plane body sideways. The first tandem jumpers opened the curtain and hung their feet outside. I finally got a pinch of fear in my stomach when I saw them sucked out of the plane like a ton of bricks. One moment they were there, and then they were gone with a whoosh. Just like that. It was silly of me to expect them to gracefully float off, but I probably wasn’t much into logic that morning. We were edging to the opening. It was time. I calmed down and smiled as I hung my feet out, squeezing them to the belly of the plane and wondering if my shoes would fall off in the rushing wind. We fell. First diving head down, then making a full flip in the air, I saw the belly of the plane floating away above me, as if in slow motion.

Then, we finished the flip and finally faced the ground in a proper arch position. The sudden pummeling of the cold, hurricane-powered wind took me by surprise. It slammed me in the face, filled and popped my ears, blew up my cheeks in the most non-heroic-looking way, and rendered me breathless for a few seconds until I got my bearings.

I have to mention now that this disgraceful and unflattering moment was televised by a handheld camera. As I was plummeting towards the ground in a free fall, reaching terminal velocity, using my face as a parachute, and casually wondering if my instructor had opened the canopy, he was filming the entire experience. The film was supposed to accompany this story, but upon viewing and cracking their ribs from laughter, my entire office had banned me from posting it. Upon some delayed but sober reflection, their reaction was akin to the Al Pacino to the Dunkaccino commercial. Oh, well. 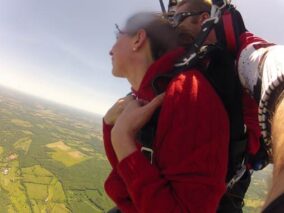 Once the chute finally opened, the beating turned into a calm and peaceful descent, with a breathtaking view stretching for miles and a maneuverable chute spinning and changing directions as we pulled on the toggles. It was exhilarating to soar above the world, and I wished it didn’t end as quickly as it did. My friends and husband were exonerated and my kids were spared the trauma.

My neck hurt for weeks after the jump, but I was indeed happy to have done it. Nothing makes humans more proud and self-assured than overcoming their fears and stretching limits.

Skydiving may not be for everyone, but you can stretch yourself in other ways, including professional development. In the proposal field, it is easy to become a dinosaur at any age by not keeping up with the new trends, tools, and techniques. It is a competitive industry so you have to keep on your toes, and resist falling into predictable patterns. 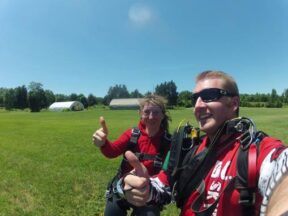 For me, growth right now means diving into the intricacies of new pricing strategies, sinking my teeth into the recently published Business Development Capability Maturity Model 2.0, integrating new tools into our work, diving deeper into studying the Federal Acquisition Regulations, and attending a three-day marketing training. And, maybe doing something dare-devilish this fall—I have a new adventure already planned. After all, business development requires guts and a willingness to push yourself beyond the comfort zone to innovate; overcome; and to lead despite resource shortages, incomplete information, and insane deadlines.

So try, dare, learn. What are the areas where you will push yourself next?

Author, How to Get Government Contracts: Have a Slice of a $1 Trillion Pie