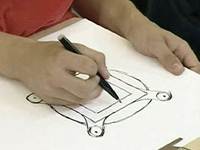 Picasso’s famous quote, “Good artists copy; great artists steal,” might as well have been about proposal art. Great proposal graphics can be born in various ways, but “stealing” a concept and making it something that is your own, something completely different from its original version and uniquely applicable to the current bid, is the fastest way to create them.

“Stealing” may sound like a negative notion, but it is not—at least not in the way that Picasso meant it. In the art world as in the world of proposals, it is “copying” that actually has a bad connotation. For the purposes of proposals, “copying” means reusing a graphic from an old proposal by tailoring it slightly to a new one, which frequently entails using the same boring and worn-out approach. Many graphics seem like they can be reused with minor adaptation, but on close examination, they just look like a boilerplate that makes evaluators’ eyes glaze over. After all, these are the types of graphics they have seen not only in your proposals but in your competitors’ proposals as well. “Copying” can also involve testing the waters of copyright violations by “borrowing” from other sources with minor changes. “Stealing,” on the other hand, means using existing graphics as an inspiration and a point of departure for your own work. It means reinventing a concept in a fresh way and creating your own original art.

The best “stolen” art does not come from your old proposals, but from sources that may have nothing to do with your particular bid. Often it will be something created in another industry, or for another purpose. Bringing such a graphic idea to your proposal and merging it with information specific to your bid or using it to spruce up your old graphics will give your proposal a fresh feel and a look that is sure to differentiate you from competitors.

“Stealing,” or rather, searching for graphic inspiration is easy these days. Just go to Google and, in the upper left-hand corner of your screen, click “Images”. Google Image Search is marketed as “the most comprehensive image search on the web.” Try different word combinations, just as you would with any other research, or use advanced search options, and you are well on your way.

As a word of warning, make sure that your “stolen” concepts do not speak louder than your message, and that you do not get too “cute” with them. In other words, do not get bogged down in metaphors to the point that your message hits reviewers between the eyes in the wrong kind of way. Use a good taste, and customize the concept or image you have found to your work so that it is unrecognizable from its original form. When used in this way, “stealing” graphic ideas will give your proposal uniqueness and great visual impact, and will increase your chances of winning.