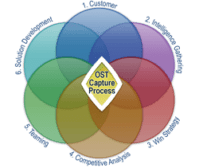 Government contractors who know how to play the game pay a lot of attention to pre-proposal preparation work and other activities aimed at raising your win probability, called capture. Essentially, capture is the equivalent of presales for commercial companies that deal with complex sales, albeit even more regimented. Complex sales is when you have to go beyond a handshake and a contract, have to position to win ahead of an RFP issuance, and then write a fairly complex proposal. The concept is old, but the term capture is relatively new, having gained recognition as a full-blown profession since the 1990s.

The goal of capture is to make sure winning is a slam dunk before an RFP hits the street, and to sustain a competitive advantage all the way through the award. According to APMP, a majority of capture and proposal industry veterans agree that prospects’ buying decisions are 40 to 80 percent made before proposals are submitted. This is what wiring is all about!

You wouldn’t try to write a proposal in the commercial world without selling yourself to the customer first, establishing a relationship, finding out about their needs, and figuring out who your competition might be. Unfortunately, in the government market, where sales is a dirty word (and a lost art) and there is more transparency through public access to bids, some people count on winning blind, without any preparation. They find an opportunity in an intelligence database that posts opportunities for bid and just go ahead and write a proposal, hoping to win.

Some simply don’t know they have to position themselves properly, and others don’t do it because they think capture is for those with deeper pockets. Amazingly enough, these bidders do get lucky on rare occasions, especially if they know how to write good proposals and the work is truly within their core area of expertise. Most of the time, however, they waste precious resources with nothing to show for their efforts.

Bidding on government opportunities without proper capture planning is no better than gambling. It’s like taking a few pool lessons, getting lucky and winning a few games, and then taking a suitcase full of $100 bills and going to a pool hall to play against the local pool sharks.

In government proposals, just like in the pool hall, there are those who know what they are doing, and there are those who know only enough to be a danger to themselves. Those who know what they are doing will work hard on capture, before the RFP ever hits the street, and will nearly always beat those who don’t. The only time someone would get lucky and win a proposal without capture is when their competitors get lazy or complacent and don’t do capture either, so everyone is equally unprepared. They all hope to win— and hope, albeit useful, is not a strategy.

Capture is the art of winning the game before it officially begins. It starts when you are qualifying an opportunity, and technically ends with RFP issuance, which indicates the start of the proposal process.

In reality, this delineation is not clear-cut. Capture has to continue all the way through the proposal preparation, and even after submission, in the post-proposal phases, up until the contract is awarded. The capture period for a regular requirements contract or an IDIQ contract can last up to five years, but on average takes about 12 to 24 months. It takes that long to convince the customer they need you and not someone else. According to an APMP survey, companies with high win rates (upwards of 70 percent) spend approximately 60 percent of their budgets on capture, and 40 percent on proposal development.

Capture as a discipline can seem complicated, but in reality, it boils down to only three goals:

1.   Limiting your competition or avoiding a competitive proposal effort altogether

2.   Getting the customer to look forward to your proposal

3.   Preparing as much as you can for a winning proposal

All actions have to serve these three goals, or they are wasteful.

Experienced government contractors who know how to play the game pay very close attention to pre-proposal preparation work and other activities aimed at raising their win probability. The goal is to make sure that a win is a “slam dunk” before the RFP hits the street and to sustain a competitive advantage all the way through the award. The article below discusses the importance of capture planning and how it can mean the difference between winning and losing an award.

OST Global Solutions, Inc.
…Because There is No Second Place in Proposals! TM
https://www.ostglobalsolutions.com