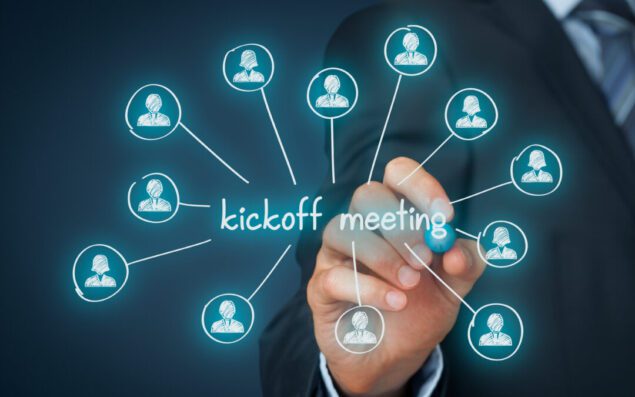 We hope you’re ready for a story from our CEO, Olessia.   It all began with a late and unprepared proposal kick-off.

When I was working at one company, we got a sudden “you must bid” directive from upper management. At a so-called kick-off, we sat in a room together reading the RFP for the first time. Senior people called all of their contacts, trying to gather last-minute teammates to patch up the holes in our strategy and we still didn’t know who was writing each section. This was well after the RFP had dropped, with only two weeks left before submission. The boss said we have to go after it – it was an IDIQ that we had to be on. Have you ever found yourself in a situation like that?
No one could decide on the schedule, and no one was tasked to tell the unlucky section leads what to write. The situation got worse. We soon realized that 90 percent of the subject matter experts (writers) we needed weren’t even present at the kick-off.   Essentially, our writers didn’t even know they were our writers. They didn’t know:

The word eventually got out to all the writers but we lost another day, and no one got to catch up to get on the same page. Because of this disorganized “kick-off”, we worked around the clock while every writer did their own thing. No one integrated the writers’ efforts, and no one worried about the consequences of not meeting team deadlines.
During the Pink Team evaluation, entire sections were missing. Other sections were cut-and-pasted from old proposals. The writers had only sprinkled these cut-and-pasted sections with the current RFP requirements, with most of the text unusable without a major “surgery”.
After a herculean effort from a proposal manager in the next few days, the core staff patched some of the holes. But, this trainwreck soon came to a stop. After an abysmal Red Team evaluation, the decision-makers, who directed the team to respond to the RFP so late in the game, decided to no-bid.
This would have been OK had the proposal effort not wasted close to $100,000 of the company’s money.

How could this be avoided? The first decision should have been to no-bid. But if it was something that was too good to pass up, and strategically important, the alternative course of action would be to take the time required to do a proper proposal kick-off.

Preparing for a Proposal Kick-off

At OST Global Solutions, we consider holding a well-thought out kick-off to be a proposal management best practice.
First, let’s get clear on what a proposal kick-off is not:

Sadly, many people overlook the importance of properly run and prepared kick-offs.   Poorly planned kick-offs result in a host of problems.

The kick-off is one of the most important milestones in the whole proposal development process, on par with the Red Team proposal review.
OST Global Solutions’ approach to kick-off meetings’ planning and communication boils down to nine steps. If you ignore any one of these steps, you will have to rough it out one way or another when creating the proposal.

Our Nine Steps for a Productive Proposal Kick-Off

At the kick-off, make sure everyone gets to know each other and require every member of the proposal team to be present physically or virtually.

2. Set Your Tone and Build Momentum from the Start

Deliver a clear message that you’re the person in charge. Remember that you’ll probably be managing many different personalities.

Discuss deadlines, communication, teamwork, weekend work, and tell your team that it is okay to ask for help before it is too late.

As part of managing expectations, you need to tell people upfront how you plan to get this proposal done. This way, they will know what to expect and can plan their work and lives accordingly.

If your management doesn’t understand what you’re doing, it’s likely that they won’t support you with resources and decisions. It won’t matter how well you planned the effort. Therefore, it is strongly recommended that you invite management to the kick-off.

We recommend that you take up to 15 percent of your allotted time to prepare for the kick-off. You need this time to integrate everything upfront, designate all or a great majority of your writers and resources, and prepare your plans and handouts.

7. Educate Your Team About the Opportunity

8. Train Your Team to Develop Great Text and Graphics

Assess your team’s proposal expertise, and determine where they have knowledge gaps. You may have to:

9. Get the Ball Rolling

Just like in building expectations, and in issuing assignments on time, it’s critically important to tell people what to do immediately after the kick-off is finished, such as setting up brainstorming meetings or mind-mapping their section content. Otherwise, you will have wasted your precious time educating people and killed trees for naught with your kick-off handouts.
Following these nine steps for your proposal kickoff will prevent problems and pain down the road. You may find yourself working fewer hours, winning more pursuits, and even enjoying the proposal process.

Need Proposal Management Training to Bring These Processes into Your Organization?

Our Foundations of Proposal Management training course is exactly what your business development team needs to bring detailed proposal planning and management into your company. Click here to see when we’re running this two-day course again. You can also email service@ostglobalsolutions.com